At the end of the day, I was a Tsunku♂ wota 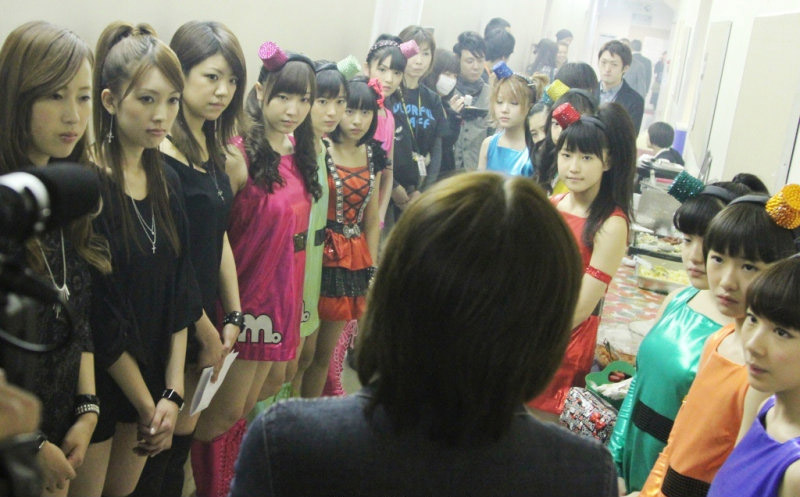 8. カラフル名無しさん 2017年01月22日 14:00 ID:Xe6UzTOv0
The people in this thread aren’t even Tsunku fans but rather the new type of anti-fans — the people constantly calling Hello Pro by “Hashi Pro.” No matter how nostalgic it might make you feel, the days when wota were all just having fun flaming Tsunku aren’t going to come back. Besides, if you hate “Hashi Pro” so much, why don’t you just listen solely to the songs written by the Tsunku that you love so much? You’re supposed to be Tsunku wota, not H!P wota, aren’t you?

↑ This really was a fatal loss to H!P.

36. カラフル名無しさん 2017年01月22日 16:50 ID:iSidQdKA0
Whenever I see people denying that Tsunku had good sense, I feel like… Do you understand anything about H!P? You don’t know what you’re even talking about. I bet you’re just an idol DD and you’ve barely even listened to the songs themselves. I think that songwriters other than Tsunku are doing a really good job as well, but lately I truly feel that Tsunku had that… weirdness(?) or addictiveness(?) that only he was able to create.

38. カラフル名無しさん 2017年01月22日 16:53 ID:iSidQdKA0
You know, when they first started introducing songs by other songwriters, I was worried. But honestly, now it’s fun just listening to all these different artists showing their respect to H!P. Like, I don’t think H!P in the past could’ve ever come out with a song like “Mukidashi de Mukiatte” and stuff. But even so, I still feel like if that respect towards Tsunku-san disappears, or if Tsunku-san no longer writes any songs for them, H!P is going to change to something entirely different.

39. カラフル名無しさん 2017年01月22日 16:56 ID:HrA5CSfG0
38
Completely agreed. I love H!P so I have no intention of hating on everything they do, and I still do love current H!P, too. But as the Tsunku-san songs get fewer and fewer, it just doesn’t feel satisfactory… It feels lonely. (laughs)

51. カラフル名無しさん 2017年01月22日 21:54 ID:LQxS7Rxg0
At the end of the day, I love Tsunku.
The lyrics Tsunku writes…
The songs Tsunku composes…
The way Tsunku sees idols…
I loved watching him recording the songs! (Back on ASAYAN.)
I loved how it was like he was creating the songs together with the singers.

58. カラフル名無しさん 2017年01月23日 21:58 ID:GXCE1FNv0
I have plenty of non-Tsunku songs I like, and even with Tsunku songs I can find plenty of both good and bad about them. Some of his compositions need more work, some of the instrumentals are cheap… all kinds of things like that. But the parental love he had towards the members, or the way he would watch over their growth from a reasonable distance, or just the immense love that he has for humanity in general, I liked all of that.

Akimoto Yasushi makes songs about schoolgirl prostitution, or otherwise just repeats things that portray women as being nothing but cheap entertainment for men. Tsunku makes ambiguous songs from the woman’s viewpoint — ones that don’t try to suck up to the male listeners — and he’s genuinely kind and he respects the singers as people. I liked that about him. He’s someone I can trust as a fellow human being.

During the Platinum Era, their songs made me go like “ehhh…” (and they still do), but then again, he also never put too much weight on marketing like AKB by trying to make every song easy. I liked how he’s an artist who’s doing what he himself wants to do. That’s rock’n’roll.

I hope he still talks to each group individually, even if just once a year, and tells them: “you’ve grown so much.“

Matsuko Deluxe:
“I love Morning Musume…
Or rather, I love Tsunku♂.” 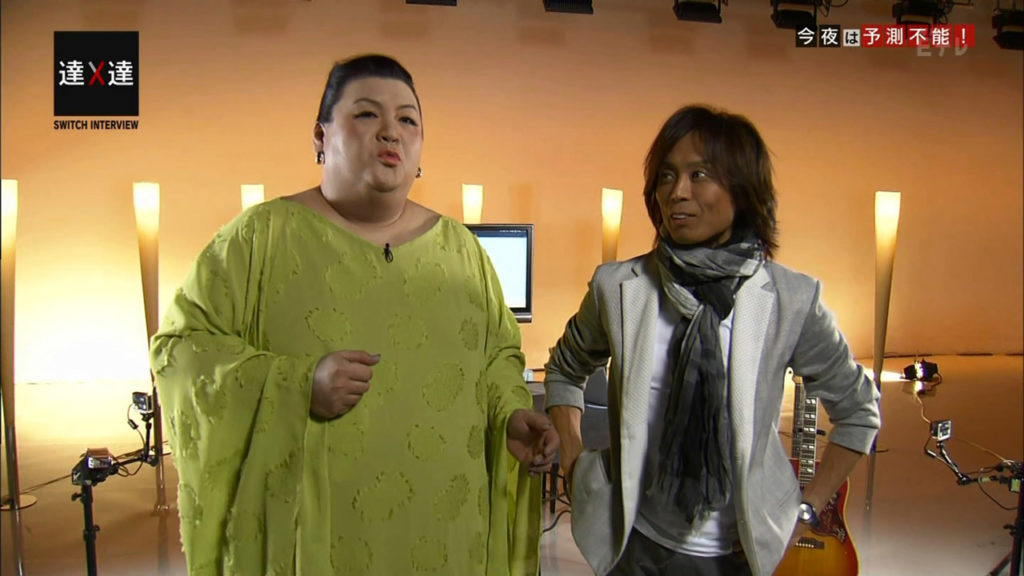 Hyadain-san and Matsuko-san were having a great discussion on TV just now! 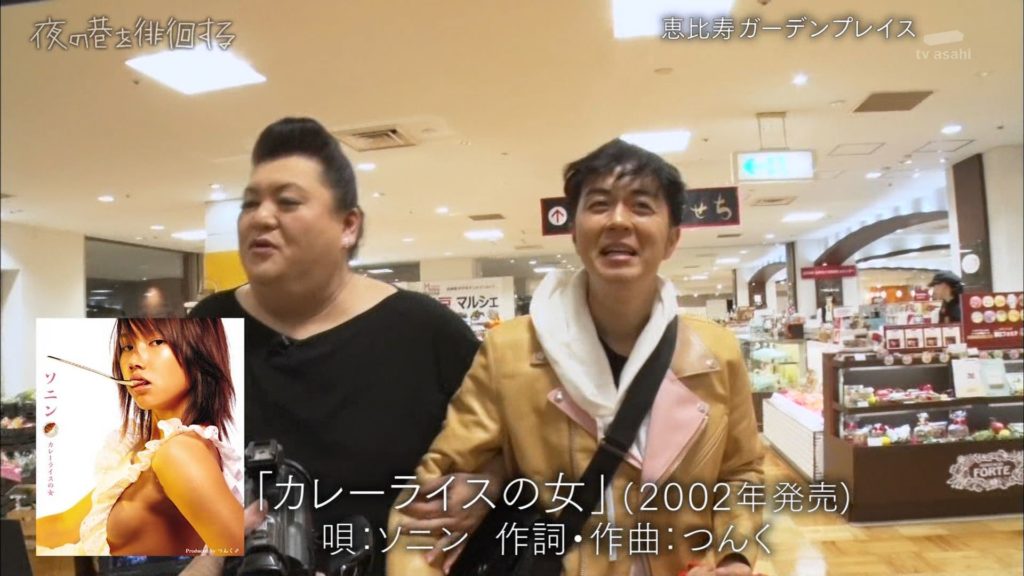 15. ℃-uteな名無しさん 2017年11月10日 04:10 id：OT5fx8Iy0
>>261
I do think there’s truth in that. But I also think it’s true that with the whole fanbase having completely changed, it’s now the case that H!P wota are mostly idol wota and the things these fans want out of H!P are different.

Michishige — who is herself an idol wota — was once speaking to Tsunku about Morning Musume, and she said she’s hoping to make her group into a “cute Morning Musume.” Tsunku corrected her: “don’t aim for just cute; aim for cute and rock’n’roll.” I feel like that rock’n’roll thing is now completely gone from H!P.

They’re still attracting new fans and doing alright so I’m not going to say that this idol wota-focused approach is “wrong” in any way. I’m just saying that personally, as someone who isn’t an idol wota, I can’t deny that I feel they’re heading in an unfortunate direction.

3. ℃-uteな名無しさん 2017年11月10日 02:56 id：bVaFm.PP0
I like Matsuko and I do feel sympathetic with what she said, but I’m disappointed with her statement. How do you think this must make the current members and staff feel? I don’t think they’re very happy about it. I wish she’d think of her position and influence a bit more before opening her mouth.

7. ℃-uteな名無しさん 2017年11月10日 03:20 id：AgtfjiIQ0
There’s no doubt that Tsunku is the identity of H!P. However, Tsunku being in charge isn’t all that is needed for H!P to be 100% H!P. It’s Tsunku’s unique sense of lyrics and rhythms and his simple, positive ideals, combined with Up-Front’s pickiness and somewhat unsociable nature as a music company, as well as all the stories created by all past and present H!P members. You need all of that to create the H!P atmosphere.

13. ℃-uteな名無しさん 2017年11月10日 03:49 id：aX.fsJMT0
My favorite Tsunku songs aren’t the super kayou-influenced ones, but rather songs like “Zero Kara Hajimaru Seishun” and “Kono Ai wo Kasanete” — songs that I’ve never heard from other idols or artists. Those are the songs that are his complete originals.

On the other hand, I also love Tsunku♂ songs like “Iji Daki,” “Wata Daki,” and “Senobi,” and when I listen to them there’s that feeling of “yeah, that’s the good stuff.“

They’re different but they’re both good. Similarly, I think what Matsuko was trying to say is that it’s not that she dislikes H!P right now, only that H!P in her mind equals Tsunku♂ songs.

28. ℃-uteな名無しさん 2017年11月10日 08:42 id：OT5fx8Iy0
There are different types of Tsunku fans, too. There are the people who like Tsunku’s music, and then the people who like Tsunku as a producer. Personally, I’m definitely in the latter group. The girls being able to sing these songs with lame lyrics wearing lame outfits while doing lame choreographies and doing it all while beaming with confidence, I think they were able to pull it off because both the performers and the people watching knew that there was this sense of security in knowing that Tsunku Producer was backing them.

To make a comparison to a song with a similar taste to Tsunku songs, something like Tsubaki’s “Shuushoku Sensation” was just painful to watch.

46. ℃-uteな名無しさん 2017年11月10日 14:06 id：G8P.jdLW0
I loved Tsunku not only for his songs, but also for the cryptic tour titles, the sudden appearances during auditions, the demo vocals… H!P just feels lacking nowadays. I don’t like Cool Hello.

48. ℃-uteな名無しさん 2017年11月10日 14:45 id：a9s0g.ZS0
Everyone’s free to enjoy idols however they like, and I personally place more importance on who’s performing over who is writing the songs or who is producing. At the end of the day I think the majority of fans are like that. That’s why even when Tsunku-san was making the songs and producing, some songs would sell while others wouldn’t.

49. ℃-uteな名無しさん 2017年11月10日 17:25 id：cgpwr42X0
Liking Tsunku is not only about his great songs. It’s also about that tremendous amount of trust the H!P members had towards him. More than his production style or whatever, I wanted to keep watching over that relationship between them forever. Without that relationship, even when someone other than Tsunku does write them an incredible song, it’s just like “well, so what?“

61. ℃-uteな名無しさん 2017年11月11日 14:50 id：EbA.faMY0
※49
I appreciate your detailed explanation. Personally, I’m impressed by the quality of songs by Kato Yuusuke (composer of Country Girs’ “Itooshikutte Gomen ne,” “Barairo,” etc), but he’s someone who works completely behind-the-scenes. He never puts his face out there, never does interviews, never writes liner notes, never communicates with the members of H!P, never gives them advice on LINE or whatever.

And for me, personally, I don’t care about that kind of thing at all. But obviously to someone like you, not having any of that makes you feel like H!P is now lacking something. It’s simply a matter of different priorities. There’s no right or wrong answer here, and that’s fine.

51. ℃-uteな名無しさん 2017年11月10日 21:50 id：lCd71jh00
※49
I so get this. Previously, Sayu was saying something like “it’s amazing how even though Tsunku-san has so many cute girls around him all the time, he’s never put his hands on them.” It’s true that there’s that relationship of trust between the H!P members and Tsunku. Yes, he was their producer. But he was also their father.

52. ℃-uteな名無しさん 2017年11月10日 22:06 id：MaJHIgNR0
I like the current Hashi Pro, but I liked Tsunku-produced Hello! Pro even more.
What I truly want is H!P members singing and dancing to Tsunku songs.

Today marks the 5th birthday of Wota in Translation. As is probably needless to say, back in 2013 I didn’t expect to still be doing this five years later. But dammit, here we are.

Wota in Translation is now open for business! And what sexy business it is… http://t.co/hk6ecUWvV8

However, from the very start, the crazy thing to me had been how so many of you guys seemed to accept my fandom of the Boy even if your own oshi members tended to vary. That’s been really nice. (Weirdly enough, a lot of you seemed to place your Hello! Project oshi votes on, you know, women instead of men!) While to my disappointment the situation between Up-Front and Tsunku♂ has obviously changed since I started this site, I still continue to watch over Hello! Project even today in 2018 — even if with diminished passion.

In any case, whether you’re a new or old reader of the site, you have my sincere gratitude for your support and interest throughout these five years. Let’s see if I still have one or two more in me.

Finally, if you like what I’m doing here on Wota in Translation, consider becoming a supporter of the site on Patreon.

As always, thank you for reading. Cheers.