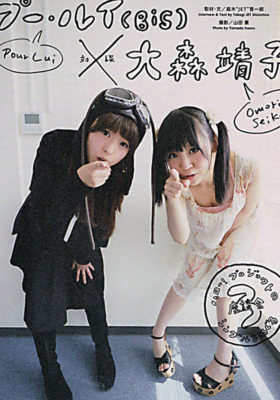 It was Pour Lui‘s admiration for Morning Musume and Takahashi Ai that made her decide she wanted to form an idol group of her own, and she then went on to become the leader and “naughty” member of BiS. Meanwhile, singer-songwriter Oomori Seiko has been performing her H!P covers at Hello! Shops, conveying her love of Hello! Project and Michishige Sayumi in particular. Admitting to being greatly influenced by Platinum Era Morning Musume especially, these two talked to us about what in Hello! Project music appeals to them, as well as what makes them so partial to Morning Musume.

— To start off, could you tell us how you first came in contact with Hello! Project?

Pour: I’m 23 years old which means I’m just the age where I was in elementary school when Morning Musume became huge.

Oomori: Same here. I’m the same age as Tsuji and Kago. I remember seeing Morning Musume on TV when I was 13 or 14 years old and being moved upon learning how those two were the same age as me and yet being such hard workers. That’s when I became a fan.

— What about them caught your interest?

Pour: For me, it was purely admiration and love.

Oomori: I’m very interested in girls — I had this “habit” of looking inside bags of girls I liked, trying to find their gym suits and stuff… all kinds of male virgin loser stuff like that. Morning Musume was the perfect target to focus my curiosity on simply because no one would get angry at me. (laughs)