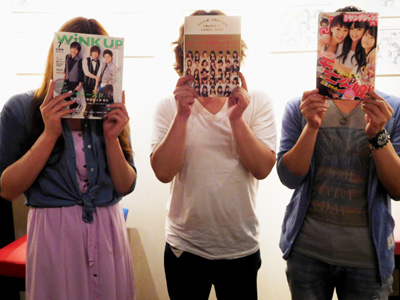 What makes a “genuine” idol for the true idol fan with a discerning eye? And what on earth are the differences and the similarities between male and female idols?

The Johnny’s-loving editorial department of Cyzo Woman went over to Hello Tribe in Akihabara, a music bar frequented by fans of Hello! Project. We sat down with three regulars and chatted about Hello! Project, Johnny’s Entertainment, and the dreams that idols allow us all to have!

── To start off, I’d like to ask all three of you to tell us how you first got into idols.

Otani: I’m from the generation where seeing idol songs ranked on the Oricon charts was an everyday occurrence in my childhood. Inspired by Hikaru GENJI, I got my parents to buy me rollerskates back in kindergarten, and SMAP started appearing on TV regularly by the time I was in elementary school, so I was constantly exposed to them. As for H!P, I got into them when everyone around me was listening to Morning Musume, and I’ve been hooked ever since.

Shibata: I was watching idols on TV when I was in elementary school, and I remember just feeling so envious of them in all their sparkliness. Morning Musume’s “LOVE Machine” came out in my first year of junior high and suddenly everyone around me was completely hooked, so naturally I started to like them, too. I’m a year younger than Goto Maki, and it just felt so new seeing someone my age being in the spotlight.

Murata: I’m in my 50’s which means I’m from the Matsuda Seiko generation, but originally I didn’t have any interest in idols whatsoever. It was only four years ago that I became hooked on Morning Musume when I happened to come across videos from the Platinum Era (a period of time between late 2007 and the end of 2010 when the group was barely appearing in the media and were instead focusing on polishing their performance skills on long, exhausting tours.) Just as when I was younger, I still obviously never see them as objects of romantic interest. (laughs) Instead, it feels like I’m cheering on my nieces or so.