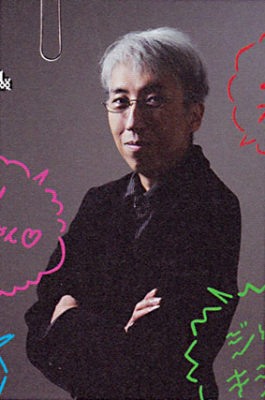 — So you work with him in the studio?

Yuasa: I work at home. I first get a demo and strengthen my image of the arrangement. That takes about two or three hours if it goes smoothly, or about two or three days if it doesn’t. Once I have an image of what it is I want to do, I program it all at once, in full. Most of the time I always start with the intro, just to help me see the full picture — though that’s often the part of the song that trips me up the most. (laughs) I always try to make it an intro that’s easy to hum along to.

— Your arrangements vary from rock-like band sounds, to heavily programmed dance music, to orchestral and jazzy type stuff — a very wide variety of styles. What do you feel is the style that you do the best?

Yuasa: While I don’t get to do it much with Hello! Project… it’s actually the American hard rock type thing. Think bands like Toto or Journey.

— Ah, you mean something like “HELLO TO YOU ~Hello! Project 10shuunen Kinen Theme~“?

Yuasa: Yeah. That kind of thing is the easiest for me. Anything other than that, when I get an order and they tell me to make it sound like “this genre” or “that band,” I first have to study everything about it. (laughs) The song “BE” from Berryz Koubou Special Best Vol. 1 features a full orchestra — I’d never done anything properly orchestral before that. (laughs) Since I had no choice but to learn how to do it, I got to thinking about the best way I could go about doing that. That’s when I remembered how I used to learn how to play the guitar as a kid: back then, I only had my instrument, my records, my chord book, and my song book. So what I did was, I went out and bought a CD of Holst’s “The Planets,” a score book, and a musical dictionary. (laughs) Whenever I heard something I liked on the CD, I wrote it down in the score book and studied what that part was made of… and then I just did that over and over again. That’s how I was able to make my arrangement. The difficult thing about that kind of song was figuring out how to make it so that it gets the listener excited. There are so many things to figure out. Where is the peak volume point going to be? Okay, let’s backtrack: how exciting can I make the verses then? Where should the crescendo be? It was hard work, thinking about all that stuff step-by-step. But the orchestral material is actually what I get the most orders for — not only just for song arrangements, but things like concert openings and such. I first started getting practice in this area with “Ambitious! Yashinteki de Ii jan!” It had both the rock and the strings and it was very difficult trying to balance those two things.

— I have a feeling that listening to these songs now, knowing you went through such trouble in working on them, will make them sound that much more meaningful. Is “BE” the most difficult song you’ve worked on?

Yuasa: I did two songs on Morning Musume’s (7.5) Fuyu Fuyu Morning Musume Mini!, and one of them was just this pure Christmas-themed song (“Wa~ MERRY Pin Xmas!” by Shigepink and Kohappink). That meant I had to make the other one not quite as Christmasy. I had to really sit down and think about the sounds on that one. On the aforementioned “Christmas song,” I could go all out and have chimes in there to make it feel like Santa Claus flying over you and all that, so on the other one, what I ended up doing was to have this sparkly sound in the intro to signify the “sound” of snowfall…

— You’re talking about “Kirakira Fuyu no Shiny G,” right? Now that you mention it, there is a touch of “winter” in there mixed with the overall rock flavor…

Yuasa: But I also wanted to give it a bit of an urban feel. I’m from Hokkaido myself so that wintery feel is my strong suit. (laughs)

— “Jiriri Kiteru” was released in March of that year, and it feels to me like there’s something wintery about that song, too. Maybe it’s the tone of the piano?

Yuasa: As I’m sure you’re well aware, the intro is Chopin’s “Revolutionary Étude.” The nuance, however, was more Gazebo’s “I Like Chopin.” I tried to keep some of that vibe while also maintaining the fast-paced beat of that song. A lot of my arrangements tend to have the piano be the main feature, whether it’s just a phrase in the intro or the basic chords of the song. I like to build up from that.

— Were there any other songs that you found difficult to work on?

Yuasa: Morning Musume’s “Ame no Furanai Hoshi de wa Aisenai Darou?” (off Platinum 9 DISC) was another tough one. My job was to take Ookubo Kaoru’s original arrangement and make it into an album version. I had to try and keep what made his arrangement so good while also adding strings. Furthermore, Ice Creamusume was to record their version of it so I had to make another different arrangement while still keeping the feel of it similar. That was quite difficult. I made the keyboards the main thing to maintain continuity, and I put hardly anything orchestral in the Ice Creamusume version, instead giving it a more poppy beat.

— Do you program all your more rock-flavored arrangements, too?

Yuasa: Yes, but it’s always with the assumption that it’ll be replaced by real instruments — though in reality they will often be released as-is. I do try to always make it sound as real as possible though.

— How about with your dance music arrangements?

Yuasa: You know how they sell those sampling CD’s? The ones that have four beats of all sorts of different rhythm patterns, but the BPM always tends to be around the 110~130 range. That’s a little low for Japanese idol music. It’s usually the songs above 140 that become popular, and the Japanese language seems to fit that tempo nicely, too. So it’s difficult to make anything useful out of those CD’s. It’s not enough just raising the tempo: you also have to adjust the tone, and you have to make it something that will sit well with the melody.

— Which of your works do you feel the most confident about?

Yuasa: Perhaps Morning Musume’s “Itoshiku Kurushii Kono Yoru ni” (off Fantasy! Juuichi). For me it’s a winter song, so I was conscious of the sound of artists like U2 and Brian Eno while making it. But it also sounds lively. With my arrangements, it’s often the case that I don’t know who’s going to end up singing the song. Kamei Eri sang the main vocal, but if what I’ve heard is correct, she graduated before she could ever sing it live. (laughs) I would’ve wanted to hear her sing it live, if even once.

— I would think that if you knew who the song you were arranging was going to, it would change the image of the song — it might be a kind of reference point. Do you not find it more difficult to arrange songs while not having this information?

Yuasa: Well, a lot of it I can only do because I don’t have that information. If I knew, it might lead to me taking what little I knew of the performer and overthinking it, causing my approach to be at odds with what the producer wants to do. And when I do know who I’m arranging the song for, like in the case of a particular Berryz Koubou song, I decided to make it sound like “Tsugunaga Momoko trying to make friends.” What with her character and all, I tried hard to make it sound very sparkly. In contrast, if I knew it was to be a °C-ute song, I’d make it cooler.

— Now that you mention it, “Momochi! Yurushite Nyan♡Taisou” does sound like she’s surrounded by all her friends. (laughs)

Yuasa: I tried to make it a song no one but her could ever sing. (laughs)

— Does it ever happen that once they decide on the singer, they ask you to go back and fix parts of your arrangement?

Yuasa: Well, sometimes there’s a key change. That’s pretty tough for me — I make everything on the computer, so if there’s a key change, I have to redo everything aside from the rhythm. It’s not a matter of just lowering or raising the key — I have to go back and change the fingerings on the guitar, lower or raise the range on the bass… And then I’ll get some new ideas regarding the song and it just becomes this endless game. (laughs) It’s difficult to try and hold back from making more changes.

— What do you think are the characteristics of Tsunku♂ as a songwriter and producer?

Yuasa: He’s very particular about rhythm. Not just the overall feel of it, but the little accents as well — he tends to throw those all over the place. That was the order I received for “Akai Freesia” as well: he wanted lots of accents in several different places. He just wanted them to fit the melody and to make them work as bits where everyone could clap along. He pretty much left it up to me as to which instruments I wanted to use — whether it was just single hits on the snare drum, or all the instruments going “bang!” all at once. That’s something he left up to me.

— As an arranger, what sort of things feel to you the most worth doing?

Yuasa: Working on arrangements, the thing that makes me the happiest is when the people who actually perform the song like it. And for the people listening to said artist, they should direct all praise towards the artist, not me. If I’m the first person being praised, that means it’s because my arrangement stands out too much. And that’s not very good. So really: the best thing for me is if the artist in question likes it, gets excited about it, and performs it well live.